Objectives:
to practice divergent ways of seeing;
to acquire information from motif.

More people were sitting than participating. Sitting in a wide circle on chairs.
• I asked the movers to warm-up, create their phrases and then pair up and go to 2 or 3 seated people.
This way, all were involved in the class.

• In preparation for generating some movement phrases I wanted to create an
appropriate after lunch warm-up based on Body/Effort/Shape/Space (BESS).

1. Create a SHORT movement phrase that encapsulates how you are right now, at this time, at this place, perhaps your emotional response in this context.
2. Show to your small group.
3. Decide which one you all will motif individually.
4. As a group, determine where the selected phrase starts and ends.
5. Motif individually. Do not discuss until you are finished.
6. Come together into your group.
7. Come to consensus about one motifed version of the phrase.

This is where my class plan stopped. I did not anticipate the different interpretations and points of view concerning the symbology itself and how problematic and fascinating this would be. This coming to an agreement about a written motifed phrase became the crux of the class. People discovered their differences and some weren't able to produce an agreed-upon motif. We also did more with the two phrases before selecting one, because there were only two people moving. I think they shared their phrases with each other before joining a seated group. I was aware of giving both phrases their due because of the nature of the assignment. And if someone had connected emotionally to their phrase, I wanted to respect and honor that.

• How does this change your original phrase?
I'm not even sure if I was able to ask this question.

• All learn/move the phrase.
Some did, some didn't.

• Create several sentences that encapsulate the essence of the movement derived from the symbology.
This became a report about the group's process of working together.

• Perform phrases for the whole group.
At this point, the session was at the end of its time frame, and since I wanted to allow time for questions, the following elements of the class were not presented:

1. Which movements are at the core of the mover’s intent?
2. What did your group learn about the movement from the motif?

Class discussion did happen, but time constraint limited that.

My purpose in using this demo class designed for LIMS Certification students was never expressed. I had wanted to communicate the following:

This is a good summary class at the end of a quarter or semester to review, reinforce what the students have learned. I like to continue and build from one class to the next. This allows them to synthesize the material, reinforce writing and observation skills, and appreciate what others see easily that they don't and what they see easily that others don’t.

They practice communicating using the language. The goal is to encourage and build confidence. I would ideally continue this material into a second class in which context was emphasized so that they could begin to see how context would influence their interpretation and motif of the movement. 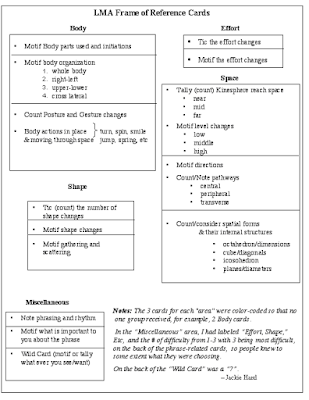 Posted by DNB Theory Bulletin Board at 1:00 PM