Film is a dynamic and widely disseminated medium, which conveys much of its meaning through the visual image, both via movement of the actors and camera work. Examination of the carriage scene in Martin Scorcese’s The Age of Innocence reveals a microcosm of the film as a whole. The characters navigate their relationship within societal constraints, expressing great passion through subtle movement of the hands. Motif description of hand and camera movement within the scene provides a basis for observation of effort factors. Hand movement and camera work emphasize space and weight throughout the scene while flow appears intermittently. Time is seen as an impulse at the start, and reintroduced near the end of the scene, heralding a drastic change in mood. A discussion of effort reveals that the scene is expressively outside of time.

This session will present motif description of hand and camera movement, analysis of effort elements observed within the scene, and invite further discussion of the movement. Gestural movement within the scene transitions to include greater involvement of the body as the characters exceed acceptable bounds. Shaping of the hands contributes to the meaning of the movement. The integration of body, shape and space into the previous analysis can provide a greater understanding of the totality of the scene.

Description of Presentation with Verbal Transcriptions.
(Quotations are from DiLeonardo unless otherwise noted)

“I’m excited about the possibility of using motif description in contemporary film, as a framework for observation. The film scene we’ll look at today is from Martin Scorcese’s Age of Innocence (1993); I found the carriage scene particularly memorable, and began to notate and study the movement while a graduate student.”

“My initial project focused on hand movement within the scene, and limited my observations to effort factors. Today I’ll briefly summarize that initial project, but spend the bulk of our time watching the scene and discussing what we see: I invite you all to continue the process of making observations…In doing so, I intend to share my enthusiasm for using motif in this context, dig deeper into this rich film scene and continue my learning process as I hear your observations.”

“This film deals with tension between personal freedoms and constraints of society. Specifically we have the character of Newland (Daniel Day-Lewis) who is interested in a woman, Ellen (Michelle Pfeiffer), who has separated from her husband. Ellen is “untouchable” and represents freedom and independence. The carriage scene is a microcosm of the film as a whole, and confirms for Newland that he can’t live in both worlds. The scene is beautifully concise, lasting two minutes in the 138 minute film. The movement, of both the actors and the camera, beautifully conveys the meaning in this scene, so much so, that of 52 lines in the shooting script, virtually half were deleted in the completed film.”

(Reviewed the Score, Figure 1 below.)

“There is a staff each for Newland, Ellen, and the camera, which is forward of the actors. The music in the background was turned off for the purpose of observation—it does not correlate directly with the movement. I observed the tempo (88 BPM) in the rhythm of the movement. As a commercial for the accessibility of this approach: virtually all notation in this score is covered in the first level of Language of Dance® Fundamentals.”

“In addition to these observations of effort factors, today I would like to expand observations to include the actor’s use of the body, space and shape. Also, I’d like for us to consider how the camera, editing, and lighting/sound create meaning, and how these might be described in terms of Laban Analysis.”

“I’d like a volunteer to record notes on the overhead – ”

“How much can be conveyed through peripheral/gestural/distal?”

“Difficult to make observations—poor lighting to see the video, caught up in the love scene, the camera limits our view of the characters…”

“Similarities to the film Picnic—how is peripheral “dance” significant in context?”

“His only shaping occurs when going down toward her wrist. Earlier in the scene, she shapes while he merely shifted his weight onto his right hip. She makes first physical contact in the scene—significant due to class differences/Victorian societal mores.”

“Room key from camera’s point of view. If from the camera’s perspective, it opens new perspective to identify with.”

“Possibility of considering the camera another mover—could be analyzed in terms of Laban Space Harmony concepts. Some camera movement can be notated as Motion Away from any direction, Motion Toward any direction.”

“We perceive quick cuts as either suddenness or rapid tempo—one or the other. Dissolves may be perceived as sustained time or even flow. Distortion causes an oscillation between slow motion and sustained time.” 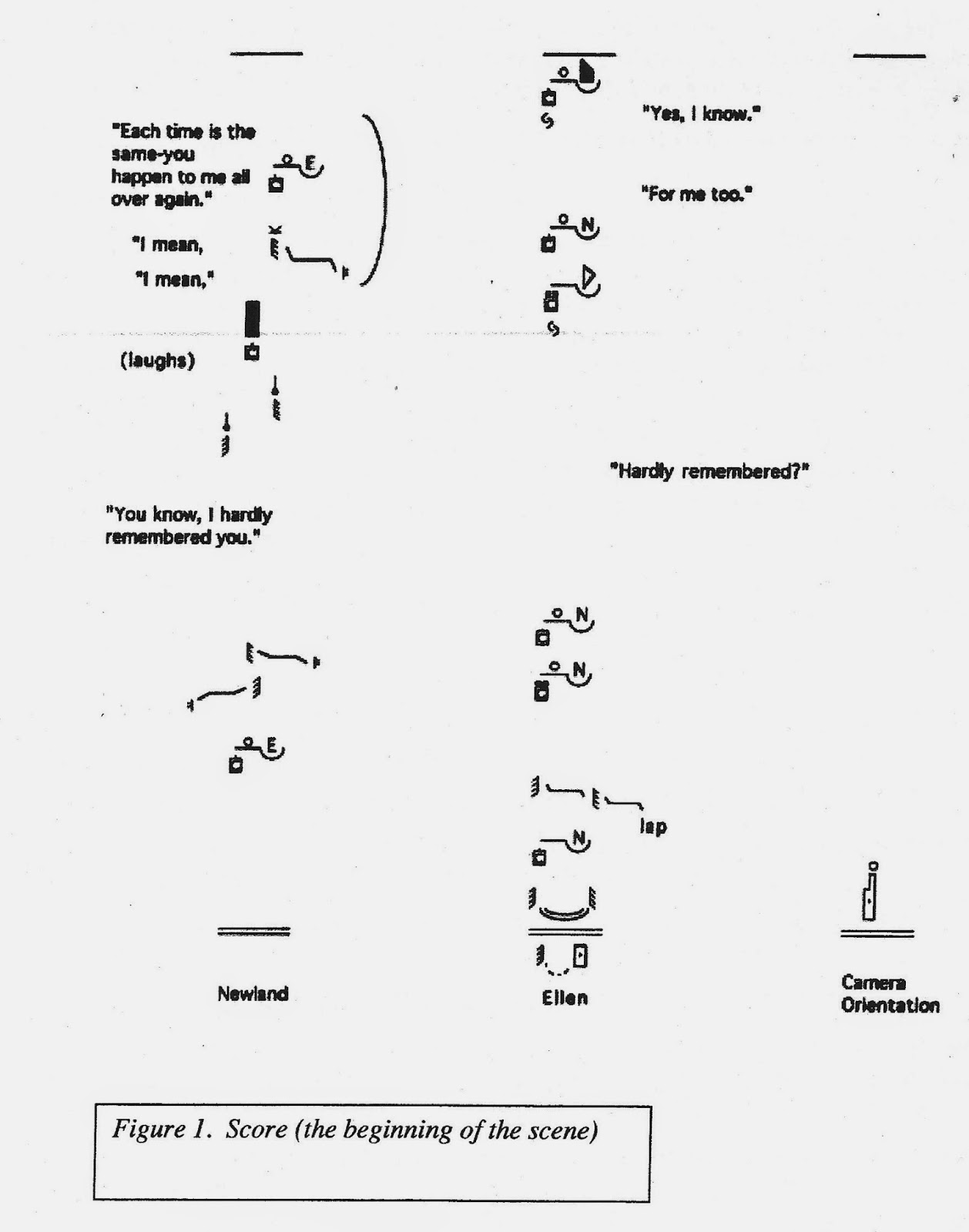 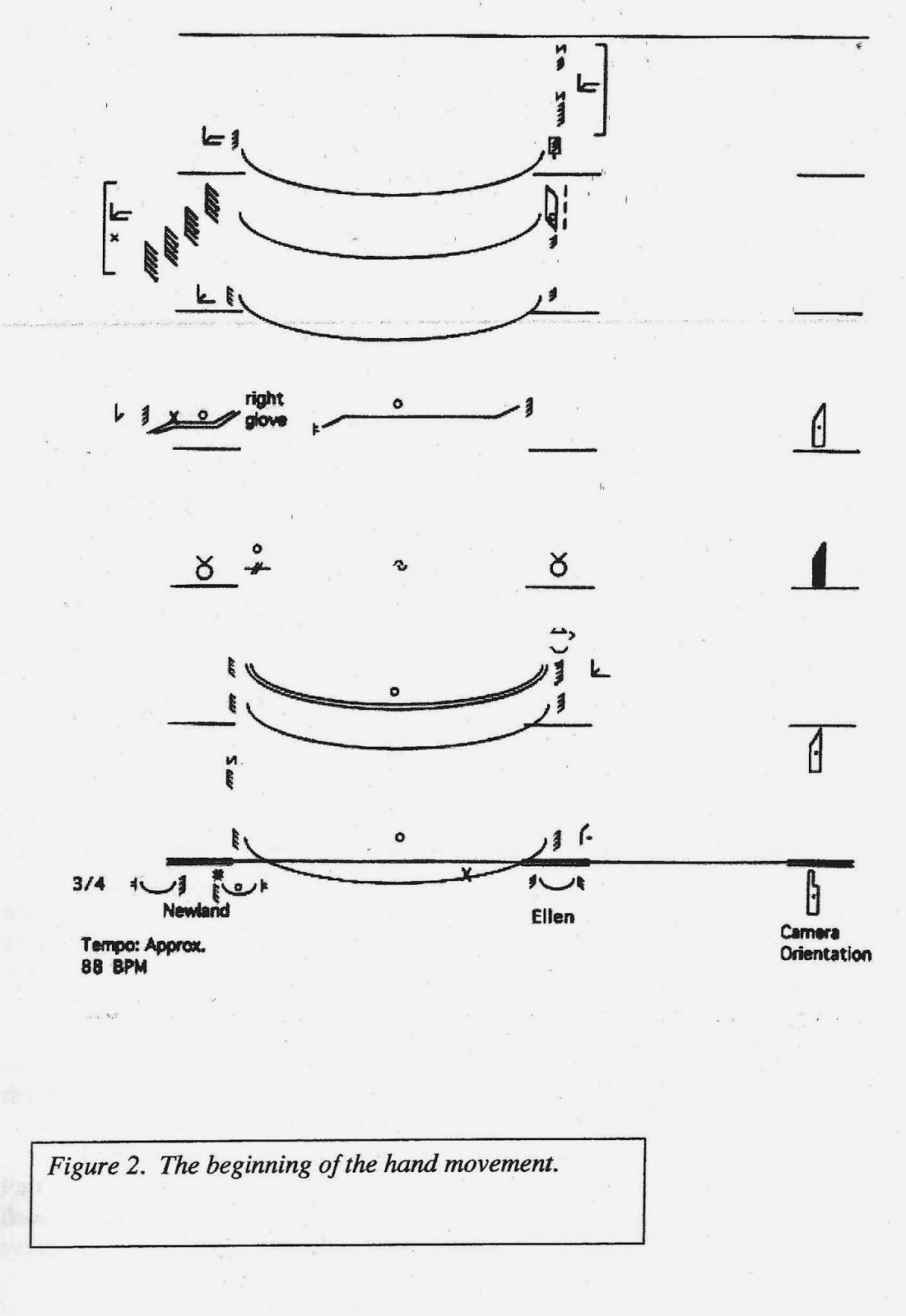 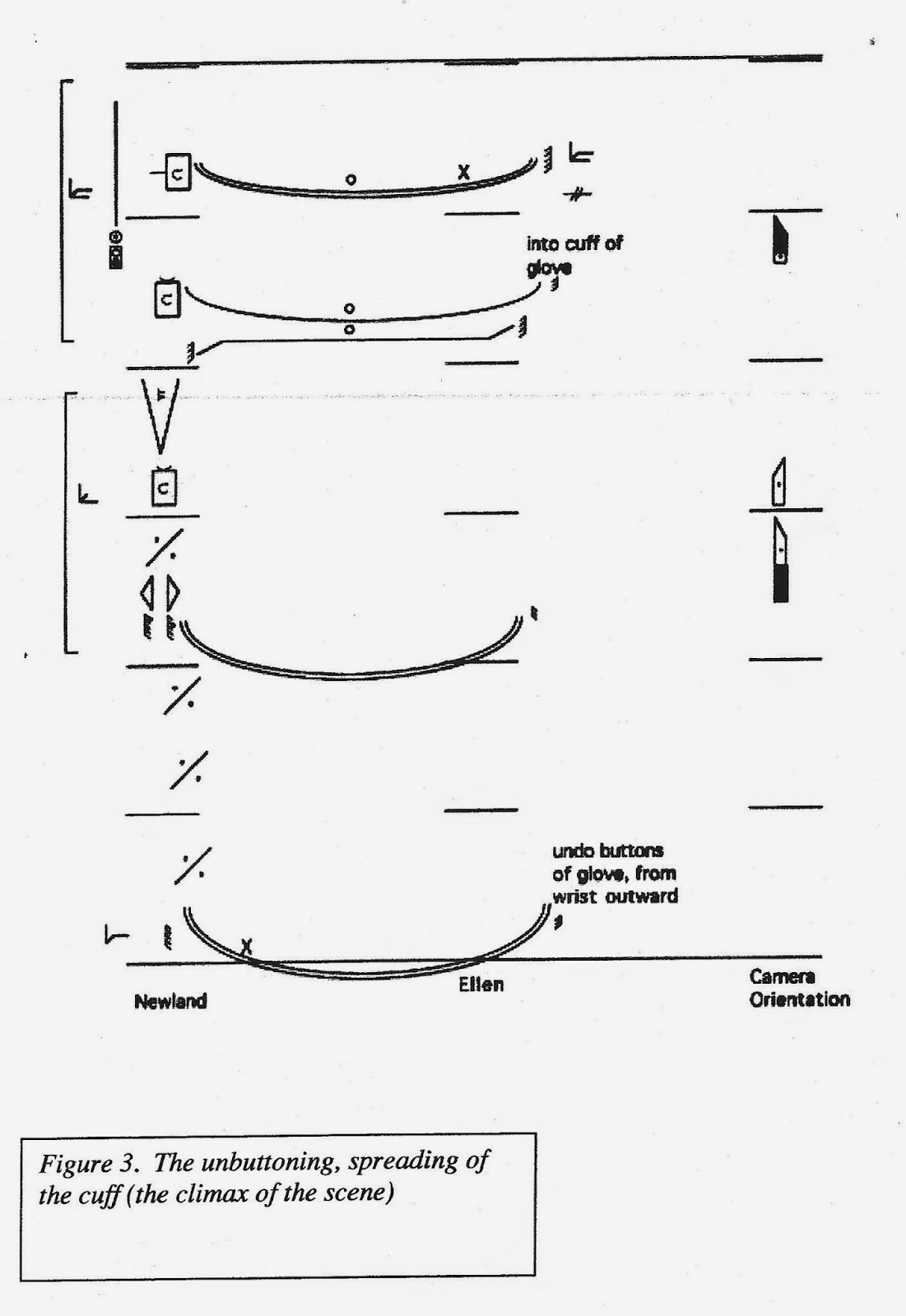 Posted by DNB Theory Bulletin Board at 4:22 PM