Indications For Freedom of Interpretation

Indications For Freedom of Interpretation
Submitted by Ray Cook – September 22, 2003

There has been general acknowledgement among practitioners of Labanotation and Kinetography that there are many inconsistent uses and meanings of the ad libitum sign both within each system and between each system. This workshop [at the 2001 ICLK conference] is intended as a presentation of existing meanings.

The basic terminology of KIN/LAB has come from the German language in which there is only one meaning for the term ad libitum - beliebign nach Belieben: as one chooses. This is the meaning used in KIN.

Laban took the ad libitum symbol from mathematics, where it is used as “ungefähr” (approximate, nearly). This is one of the meanings used in Labanotation.

From the beginning of our systems more than one meaning has been given to one symbol. Its usage is spread too thinly with too many interpretations. As a discipline, ICKL may give any appropriate meaning to the ad libitum sign. What was once sufficed does not anymore. Like the thinking behind Motif Writing that has developed into a discipline, so ad libing has developed from its early usage to a complete means unto itself, as seen in contact improvisation.

There are many diverse meanings given to these words in the English language. Following is a list of sample meanings taken from Webster’s Dictionary, Webster’s Thesaurus, and The Oxford Companion to Music. Meanings that were conflicting or repetitive have been omitted (except for the word “similar.”)

Extemporaneous: 1) Marked by or as if by no previous thought. 2) Performed without previous preparation. 3) “Ex” - out, “temp” – time.

Ad libitum: 1) As one desires, as much as one pleases. 2) Vary the strict structure. 3) To include or omit part of.

Approximately: 1) Nearly correct or exact. 2) To be near to.

Similar: 1) Exactly corresponding. 2) Having characteristics in common. 3) Having a general resemblance, not exactly the same. 4) Comparable, related.

The sign shown below indicates the liberty or freedom to vary the given frame of movements or positions within the context.

The given frame of movement may be varied in three ways and these three ways are the three basic meanings of the ad libitum sign.

The three basic meanings of the ad libitum sign are:

a) Improvise, as one chooses, as one desires, extemporize. The movement may be in a pre-described style or not. The improvisation may be on either known or unknown material.

b) Approximately refers to a movement or position that must already be known or understood.

c) Similar, comparable, somewhat alike, having a general resemblance to something already known. Similar must also refer to a movement or position that is already known or understood. The interpretation often depends upon one’s background; e.g., Ex. B - F may be thought of as being similar to Ex. A.

Ex. F is identical to Ex. A but falls within the dictionary meaning of similar, which is ‘the same’ or ‘identical.’ This is also the meaning given in Labanotation under Analogy Signs.

Of the found meanings from standard texts there are four which do not come under the five chosen key words given above and these are:

a) Perform in the simplest way.
b) Natural movement should not be hindered.
c) Abbreviation.
d) Continue in a like manner

Opening thoughts on the symbol.

As notators we often come to movement that does not quite fit the meaning of the symbol and we add the ad libitum sign. However, the reader does not know exactly how to interpret this combination of symbols, nor does the reader know if the choreographer would accept the result. There has to be a boundary of interpretation.

We too often interpret the symbol the way we were taught. For example, the ad libitum sign through a series of forward middle support symbols (or following) has been taught as – run pell-mell (Kin) or run freely forward. However, if we were to take the meaning to be improvise, approximate or similar, then we could or would have to address everything that the symbol addresses, i.e., the body part, direction and level, timing and quality. And what if the instructions given to the dancer was to improvise on all except level? Would we add the notation for – do not include?

When teaching and writing I think that it is true to say that one searches for alternate words to describe what one is trying to get across. It adds variety, but without having checked the dictionary meaning of the words, a different intention is unintentionally given us with the ad libitum sign. For example, the English meaning for pell-mell is – in a jumbled, confused manner. Frantic, disorderly, haste etc.

As section from Ulysses recorded in Kin by G. Reynaud in 1998 was read in which there were six different uses of the ad libitum sign. Following are comments on the six examples.

Ex. 2. Ad lib arm.
--The ad lib sign could be read as “do anything” with the arms. (Ray Cook)
--You have to do movement that is similar to what has been written before. (Leslie Rotman)
--With no previous exposure to style or choreography the reader does not know the boundaries of interpretation. (Ray Cook)
--Often as notators we are writing process which the choreographer may not want as the final result. (Mary Corey)

Ex. 3.
--We must revisit the meaning of the wavy line which does not mean ad lib. (Ann Hutchinson)

Ex. 6.
-- Ex. 6 is a case where we go back to class thinking and do what we were taught. There is nothing in Ex. 6 that says not to include the turn. Current practice is to use a dotted horizontal line to isolate the movement to be acted upon. (Ray Cook)
-- Ex. 6 means continue in the same manner. (Billie Mahoney)
-- It has reference to the number of steps. (Marion Bastien)
-- It is a convention that is not written anywhere. As a writer you want to write what will be easily read. (Mary Corey)
-- When we were performing “Ulysses” some people were on the beat. The ad lib symbol as shown here means do not be aware of the beat unless it is written differently. (Ann Hutchinson)
-- If you want previous steps to be free timing, draw the ad lib sign through the symbols. (Billie Mahoney)
-- We are talking about and putting two different ideas together – pattern of feet and timing. (Tina Curran)

The following examples were put on the board for discussion. 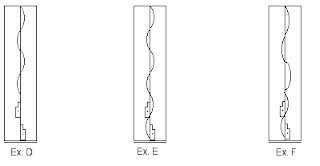 Placement of the ad libitum sign also changed the meaning of the symbol to which it referred according to where it was placed.

Other suggestions for placement were:

In Ex. Q and Ex. R below it was not clear to what the ad libitum sign referred because there is no rule for it’s placement beside a symbol.

Altering the shape of a symbol was also suggested. Ex. S says do the necessary flexing to achieve a result – as in partnering. (It does not mean any.) Ex. T says do approximately the same as dancer X.

If the ad libitum sign is small it pertains to the symbol it is connected to. (Ann Hutchinson)

It is a dangerous practice to rely on the size of a qualifying symbol for information. (Ray Cook)

If Labanotation is to live on we need to know that interpretations will change and we need to let them. Some historically accurate performances are dull (Muriel Topaz). Who however is making the choices for these interpretations? Director, dancer, notator? (Mary Corey)

There is not a one size fits all solution for this problem. Use the glossary. (Sheila Marion)

The misreading of Fox’s notation of the Sokolow piece [which was also given as a reading during the workshop] pointed up the necessity of reading all word notes as they apply to the use of the ad lib sign.

We need a symbol for “what ever you want.” (Ann Hutchinson)

Some of these symbols are meant to be vague and we need to have the flexibility to use them this way. (Leslie Rotman)

We often write the ad lib sign to write something we think is difficult. (Mary Corey)
Posted by DNB Theory Bulletin Board at 11:57 AM