The videos and written summaries below document the Open Theory Meeting held on October 19, 2012 at the Dance Notation Bureau in New York City. 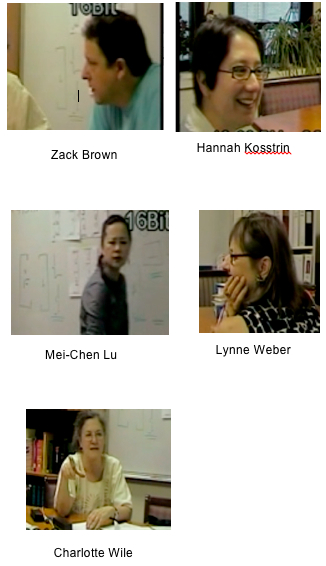 1.1  Video 1 is about Thematic Notation.

1.2   Thematic indications, such as those in Ex. 1a, were developed for Motif Notation, but they might also be useful in Labanotation. 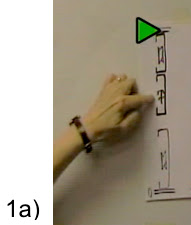 1.5   There are any number of criteria that can be used to determine what aspect of a unit is thematic, e.g., what occurs most often, is most dynamic, etc. [See page 284 in Moving About, Chapter XII]

2.1   In the first part of the video the group discusses thematic Effort notation.

2.2   Effort can be indicated thematically with the sign for the salient Effort inside a thematic bracket. In such notation the number of times the salient Effort occurs during the thematic unit is unspecified. As well, the loading of the Effort quality from which the theme was derived is unspecified (i.e., it could be a single Element, a State, or a Drive). [See pages 276-279 in Moving About ]. The group watched this video as an example.

2.3   Thematic notation can be used for various applications, e.g., as a structure for dance improvisation or for indicating the analysis of a dance’s style.

2.5   In the second part of Video 2 the group discusses KineScribe on iPad.

2.6   Hannah discussed the KineScribe project that she is directing at Reed College. The purpose of the project is to develop an app for using Laban based notation systems on iPad. The app will contain all the symbols that are in LabanWriter [Read more about the project at <http://www.reed.edu/news_center/index.php?id=8ba6e5ab860a0f1b75a713db9b564a26&criteria=&year=2011>.]

2.7   The app will make it possible to read existing LabanWriter scores and create new scores on an iPad. It will open up new ways to use the Laban based notation systems.

3.1   In the first part of Video 3 the group continues their discussion of KineScribe.

3.2   The app will be free.  It will make it possible to store and work with multiple scores.  It might be built on a vector system.

3.3   Hannah said the resolution and other aspects of iPad will make the app very versatile. The group agreed that the app will be extremely useful for students and practitioners.

3.4    In the second part of Video 3 the group discusses a Labanotation textbook that Zack is writing. The purpose of the book is to answer problems that Zack has encountered in his study of LN.

3.5    One issue he is concerned about is the indication of gestures vs. locomotion. Zack said that some symbols used to notate gestures (e.g., the symbol for “place”) have a different meaning when they are used to indicate locomotion. He feels this can be very confusing.

3.6   In his text Zack addresses this issue by changing the way notation is taught. For instance, he deviates from standard texts by first teaching the concept of “Front” and how it can be applied to notating gestures. In contrast, in the standard LN texts stepping is taught before gestures.

3.7.  The group discussed how changing the order in which movement aspects are taught, e.g. gesturing first, then locomotion (weight-bearing movement), could allow us to understand and perceive movement in different ways.

3.8   In Motif Notation the paradigm is somewhat different. For instance, in MN one main distinction is between body part (gesturing) and whole body movement.

4.2   The group examined the similarities and difference in the meaning of “place” (“center”) for gestures vs. supports.

4.3   Can changing the way LN is taught expand its use to a larger community, e.g., beyond trained dancers?

4.4   Zack said it is useful to teach secret turn signs [as in Ex. 4a]. He feels they allow one to explain Front signs without the indication of turning and to avoid questions about gesture vs. locomotion.  As well, the meaning of secret turn signs is consistent throughout the system and they are easy to explain.

4.5   Zack’s text teaches “elementary” gestures, which he defines as symbols that do not require other symbols to augment them.

4.6   Zack said that in order to explain the direction of gestures, it is important to first teach the cross of axes, Front signs, and the secret turn symbols.

Posted by DNB Theory Bulletin Board at 3:20 PM