Jordan Isadore is a dancer/choreographer originally from Northern California. He received his B.F.A. in Dance from California State University Long Beach in 2009. Upon relocating to New York, Isadore has worked with choreographers Alexandra Pirici, Christopher Williams, Andrea Miller, Sydney Skybetter, and Jennifer Edwards.  Most recently he’s worked with Shen Wei Dance Arts, and has performed at the David H. Koch Theater, Mariinsky Theater, throughout China, South America and Europe. His own work has been presented at The Museum of Arts & Design, 92nd Street Y, Joe’s Pub, Madame Tussauds, and The American Dance Festival.


Reimagining movement through mobiles. Taking dance movement that has been recorded using Labanotation, he returns these movements to their kinetic roots through mobiles made of stained glass and mixed metals. As a trained dancer he was introduced to Labanotation in college and instantly had an infatuation with it, however placed it aside as he focused on a career as performer. Now that he is planing his retirement from performing he started to investigate his other interests, most of which are design, home decor, and crafting. When he was looking at current trends in home decor and design he noticed that everything was leaning towards minimalist geometric shapes, all he could see was Labanotation. He loved the idea of notating three-dimensional movement, and the two-dimensional notations that are produced. He interpret these two-dimensional symbols into three-dimensional objects and suspend them into space. The movement of the mobile generates glimmers of the original notation, while creating new dances with each rotation. 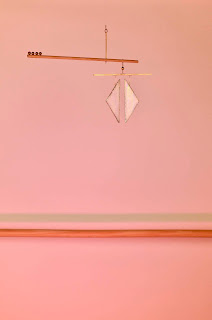 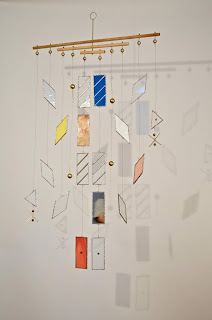 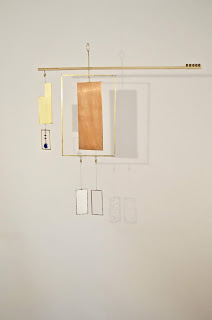 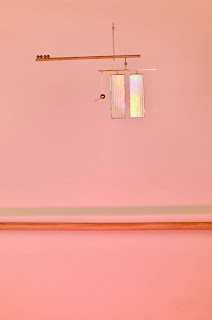 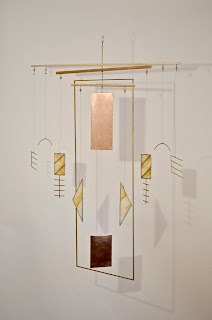 Posted by DNB Theory Bulletin Board at 12:02 PM 2 comments:

Following John Martin’s announcement on the forming of the Dance Notation Bureau we had a letter from Universal Publishers stating that we must in no way infringe on their copyright.  The background to this was the experience that Irma Bartenieff and Irma Betz had in 1937 in publishing their book of Studies in Laban’s Dance Script.  They were not allowed to give any explanation on the meaning of the symbols, that information was given as a leaflet insertion with Universal Publishers’ copyright.

In 1940 we replied that our activities did not infringe on their copyright.  This limitation did pose problems for publishing a textbook in the future.   We sought information from Laban but he was unable to help.  All that our investigations produced was the strange information that the copyright had been requisitioned by the American Army when in Vienna after the war and then resided in Washington D.C.  I fear that all correspondence concerning this no longer exists in the DNB files.  As with the letter from Ninette de Valois expressing interest in having Labanotation at the Royal Ballet School (a very valuable document) these documents may have been turfed out when Herb Kummel took over as director of the DNB, his attitude being that nothing of the past was of value.

Because at that time a copyright extended for 27 years and then had to be renewed, in 1954 we were hoping that Laban would not be aware of this and the copyright would expire.  He did become aware of it and hastily put out a publication Principles of Dance and Movement Notation by Rudolf Laban.  It was so full of mistakes that it was rapidly withdrawn.  I happen to have two copies of this publication.  In it he stated:
NOTICE
This book is copyrighted in the United
States of America and in all countries
signatory to the Berne Convention.  No
part of it may be reproduce in English
or in translation unless my written
permission and that of my publisher has
been obtained

RUDOLF LABAN
N.B. The signs for the notation of chore-
Graphic or other movements may, with due
Acknowledgement, be freely used. – R.L.

In 1956 Laban published a more impressive hard cover book with the same title published by Macdonald & Evans.  It contained the same notice as above.   In it we found signs and usages that were unfamiliar to us.  Laban considered it his system, he did not need to confer with anyone else.  However, in the early 1930s,  he had given the system to the world, he was no longer interested in developing it, nor did he establish a body to oversee its development.  Were it not for Albrecht Knust, who made it his life work, Sigurd Leeder and Ann Hutchinson with her colleagues at the Dance Notation Bureau, the system could well have died away.  More than once Laban was keen to take it all back.

My first Labanotation textbook was published in 1954 by New Directions.  How did we cope with the copyright situation?  The copyright statement was as follows:

At the back of the book these appendices were given:

Variations in the drawing of certain symbols as used by some European colleagues have been included in this alphabet in order to facilitate reading scores.  These have been marked “alternate version.”

In his 1958 Kinetography Laban publications Albrecht Knust  made similar statements.

The 1970 edition of Labanotation, published by Theatre Arts Books gave the following:

However, in the pages of Glossary of Symbols (page 499 on) there is no separation.
For the enlarged 2005 edition it states: Copyright ©  2005 by Ann Hutchinson Guest.  The appendices include: A – Alternate Versions.  B – Old Versions.  C – Orthography and Autography.  D – Upper Body Movement.  E – Terminology.

Compiled by Ann Hutchinson Guest on December 8th, 2016.
Posted by DNB Theory Bulletin Board at 12:00 PM No comments: