Some Thoughts About Indicating the Design of a Locomotor Path.

The notation that accompanies the page contains an indication (shown here in Ex. a) for a zig-zag path.

Drawing the design of a locomotor path inside a path sign is a novel idea I haven’t seen elsewhere. I think having a way to specify the path design on the staff (rather than on a floor plan) is useful.  I have another idea how it might be done.  Ex. b shows an established method of depicting a zig-zag design drawn by the arm.  Perhaps the same idea could be applied to locomotor movement, as in Ex. c. 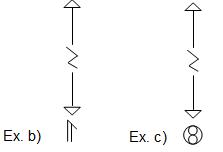 The use of the whole body pre-sign in Ex. c brings up another issue. In the LODCUSA notation, a path sign without a pre-sign, as in Ex. d, indicates a locomotor path (i.e., the trace form on the supporting surface produced when the whole body travels.) The LODCUSA notation doesn't depict a gestural path, but one could surmise that it would be shown with a body part pre-sign. as in Ex. e.

If Ex. d indicates a locomotor path and Ex. e indicates a gestural path, how do you write that the body portion involvement is unspecified? In other words, the design of the path is the salient aspect. Whether the design is produced by the whole body or a body part is open to interpretation or irrelevant.
I feel a good solution is to have the indication without a pre-sign leave body portion involvement open (Ex. f).  Then locomotor paths can be indicated with a whole-body pre-sign (Ex. g), and gestural paths can be indicated with a body part pre-sign (Ex. h). The same idea can be applied to design drawing (Ex. i-k).
(For further explanation and examples of this approach, see Chapter VIII in Moving About, by Charlotte Wile with Ray Cook.) 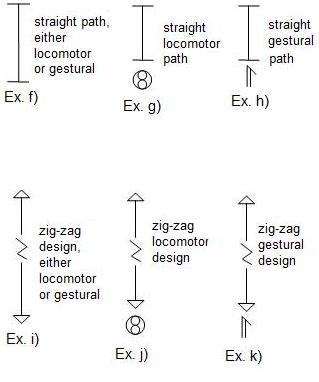 Posted by DNB Theory Bulletin Board at 11:52 AM