Following are minutes for the Open Theory Meeting held at the Dance Notation Bureau, February 9, 2011. The minutes were written by Charlotte Wile.

1.2  The first part of the meeting was used to make an experimental video of Ann giving an advanced level lecture on “Weight.” The DNB is exploring the idea of using such videos for advanced notation study materials.

1.3  Ann’s presentation was extremely thorough and included many of the topics in Center of Weight: Advanced Labonotation, Issue 7, by Ann Hutchinson Guest and Joukje Kolff. The lecture was too long to be described here in detail.  An example of what Ann talked about is shown in Video 1 below. (Here and elsewhere in the minutes, to make a video larger, click the "YouTube" icon on the right bottom of the video.)


2.1   TOPIC #2: Timing and Placement of Symbols in Relation to Ticks

2.2  This discussion was a continuation of the discussion in the November 17, 2010 minutes (Topic #2) concerning the placement and timing of symbols in relation to tic marks.

2.5  In discussing this issue, Ex 2a was considered. The gap is needed to show that there are two separate directions in the movement. Without the gap (Ex 2b) the notation would have a different meaning. 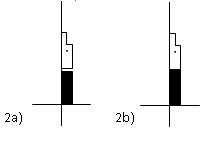 2.6  Everyone agreed that the first symbol in Ex 2a has the same time value as the second symbol. In other words, the gap is included in the overall time value of the indications.

2.7  However, there still remained some confusion about where the beat occurs in the notation. Ray said that if there were no symbols on the staff, the beat would happen on the tick mark. Ann replied that it occurs immediately after it, not on it. She said a tic mark is like a fence in a garden. It is used to divide the garden.

2.8  The orthography of 2c was discussed. Caity wondered if the gap was needed. Lynne said the gap is used for clarity of reading. Sandra said the gap would only be needed when you have two flat edged symbols sitting on top of each other. In forward steps, as in 2c, you don’t have that problem and the gaps are not necessary. Ann said the gap is needed so that the tic marc can be seen.  Without a gap, as in 2d, tic mark may not be visible.

3.2  Just before the meeting Billie Mahoney e-mailed comments on the November 2010 minutes.  Unfortunately, it was not possible for Billie’s comments to be distributed before the meeting and there wasn’t enough time to read them thoroughly during the meeting or to respond to all the issues that she discussed. The group decided to just focus on the issue of transient foot contacts without sliding.  Billie’s entire e-mail can be seen here.

3.3  On page 4 Billie wrote, “For clarification, ex. 3a-d) explain tap dance movements in contrast to János’ understanding. THERE IS NO SLIDING IN FOOT CONTACTS! (only with sloppy execution, which takes many hours of class time drilling to overcome.)The detailed execution is shown first, with the prime (’) examples showing the simplified way of writing.”  [Billie’s examples are shown here below, reformatted for the blog]

3.4  At the meeting Ann said the indication for a leg gesture with a single contact hook, as in 3e below, indicates a leg movement that ends free of the floor (a “V” shaped path, as in 3f). The untrained person would probably touch and then do a tiny bit of sliding before they lift the leg (the path would be curved at the bottom, as in 3g). Billie wants such indications to represent a single touch, without sliding (as in 3f).

3.5  Charlotte said that in János Fügedi’s 2007 ICKL paper “Unit Timing of Touching Gestures” he says a single touch without sliding is not possible. There would always be some sliding, even in tap dance. [See this online copy of the paper, p. 6. The paper is also in the 2007 ICKL Proceedings, pp. 33-48].

3.6  Ann asserted that doing the movement as a single touch without sliding is possible. It requires skill, a special flexibility in the ankle so you can touch and then let go. You need to be trained in the [tap dance] style.

3.7  Zack said that in terms of physics, it is impossible to not slide a little when you touch. He asked Ann what she meant by “touching.”

3.8  Ann again said it is possible for Billie to touch without sliding because of what happens in her ankle. See Ann demonstrating this in Video 2 below. (Unfortunately, the video doesn’t show the ankle movement very well, but hopefully it will still help clarify what she said. Starting on the left side of the screen, going around the table, it shows Lynne, Ann, Caity, Zack. Also, Ray and Charlotte are heard in the back ground.)

3.9  Charlotte said that awhile back, when the group was discussing János’s papers, she, Mira Kim, Mei-Chen Lu, and Emile Way did an experiment to explore transient touches vs. sliding touches. They videotaped themselves doing a transient leg gesture. First they did the movement attempting to not have any sliding, and then they did it with slight sliding. Unfortunately, on the video it was hard to see whether or not there was sliding in the “non-sliding” movements. However, they felt the sliding and non-sliding movements did look and feel different. In other words, even if there was some sliding in the “non-sliding” movements, performing them with different intents affected the execution of the movement. We had originally planned to put the video on YouTube, but decided not to because the subtlety of differences between movements was not visible when the video was put online.

3.10  Ann said she and Billie disagree about the use of the single hook. Billie wants Ex 3e to always mean no sliding, as in the way she uses it for notating tap dance. In contrast, Ann says in 3e a bit of sliding is permitted, as in the way people without tap training would do the movement.  If you want to specify sliding, you write it as in 3h. If you want to specify no sliding, you write it as in 3i.

3.11  Ray: Regardless of how much training you have had, according to the meaning of the touch sign, 3e should not be read as “it’s OK to slide.” If there is always going to be sliding, why do you need a symbol for touch? If 3e can be interpreted in two different ways, then you are in trouble.

3.12  Ann clarified that she feels the single hooked symbol indicates that you intend to do a single touch, but without special training you will end up doing a tiny slide. If you definitely want to have no sliding, then you would write 3h.

3.13  Sandra: When you wear point shoes it is easier to touch without sliding, as in tap. If you are on demi- pointe, it becomes harder.
3.14  Charlotte: We should keep in mind János’s perspective on the issue, including his exploration of gestural touching in “Ways of Notating Floor Touching Gestures with the Foot,” by János Fügedi & Gábor Misi” (I believe the article was written for the 2009 ICKL conference, but I’m not sure if it has been published yet). As I understand it, among other things, the paper proposes using a release sign, as in 3i, to indicate transient touches (without sliding).  This would mean the single hook symbol without a release sign (as in 3e) could be used for other purposes (e.g., see János’s paper “Unit Timing of Touching Gestures”).

3.15  Sandra: If a dancer does a tendu several times, each one will be different. But the underlying movement is the tendu. That is what you are writing.

3.16  Zack reiterated that according to physics the movement will always have a slide. What you are writing is what you intend to do, regardless of whether or not it in fact contains sliding. So it doesn’t matter whether or not there is sliding.

3.17  Ann said it does matter, because, as she said earlier, in Billie’s performance of tap there is indeed no sliding because of the foot and ankle action.

3.18  Sandra said that such style issues should always be glossarized to make sure it is clear what is meant by the symbols.

3.19  Ray said that it may be that in order to do the movement without the slide, you need to flex the ankle. If you do it without the foot action, you would slide.

3.20  Lynne said the surface you are moving on also makes a difference. If you have a harder surface, such as a tap shoe, the movement is more likely to have a bounce to it, without sliding. The movement will rebound off the floor. (The discussion in paragraphs 3.16 -3.20 can be seen in Video 3 below. The video shows, from left to right: minute .10 - Caity, Zack, Charlotte; minute .45 – Ann; , minute 1.21-Sandra talks in the background; minute 1.42 – Zack, Ray, Charlotte, Oona; minute 2.05 – Lynne.)

3.22  Lynne: Composers sometimes write things that are impossible for the musicians to do. They are written to show intent rather than what can actually be done. And then sometimes in the future people acquire phenomenal technique and can actually do them.

3.23  Sandra: Also, the tempo of the music is going to determine a lot because the faster the music is, the more bound you are muscularly, which means you will probably rebound more. When the music is slower the muscles react differently.

4.2  The last few minutes of the meeting were devoted to bringing everyone up to date on plans for the upcoming ICKL conference. The idea of having Motif Notation included in ICKL theoretical discussions was promoted at the last meeting. Charlotte intends to follow through by submitting a Motif Notation theory paper on “altitudes.” Also, the possibility of having long distance participation in the conference via Skype is being investigated.

4.3  Charlotte said the project of scanning all the ICKL technical papers is coming along. Eventually the facsimiles will be posted on the Theory Bulletin Board so that the papers will be more widely available.

Posted by DNB Theory Bulletin Board at 3:04 PM