The videos and written summaries below document the Open Theory Meeting held on July 10, 2013 at the Dance Notation Bureau in New York City.

1.1   Attendees were given flyers about the new "Journal of Movement Arts Literacy"

1.5   In Labanotation Ex. 1d indicates a destination for the flexion.  The meaning of 1a and 1b is unclear.

2.1   In Video 2 there was further discussion about Ex. 1a and 1b above.  Some related issues were also discussed.

2.2    Ex. 1a and 1b have different meanings depending upon the context of the notation.

2.3    The use of the intention symbol (2a) to show an indication is “qualitativie.”

2.5    The disappear sign is drawn narrow, as in 2d, in contrast to the decrease sign, which is drawn wider, as in 2e.

2.7    How does the use of the space indications in 2f and 2g fit into their use to indicate the distance of the legs from the floor and each other [See “Labanotation Disscusions”, by Ann Hutchinson Guest; and “Minutes for the Open Theory Meeting, November 4, 2008” (Topic #4)]

2.8   Should we rely on context to determine the meaning of symbols? Is it always important to always exactly specify the meaning of symbols and conventions, e.g., as in the interpretation of timing in relation to bar lines. [See "Minutes for the Open Theory Meeting, November 17, 2010"(Topic #2)  and  "Minutes for the Open Theory Meeting, February 9, 2011" (Topic #2). 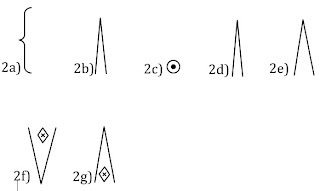 3.2.   Next the group discussed Lynne's paper on design drawing for the upcoming ICKL conference.  (See the paper here.)

3.3   How should design drawings on a high surface (the ceiling) be interpreted? For instance, should Ex. 3b and 3c be drawn moving forward or backward? According to the rule outlined in Guest and Haarst, Advanced Labanotation (Vol. 1, Pt 2), the design would be drawn moving backwards. Lynne feels the rule is confusing. She proposes the rule be changed so that such indications would be interpreted as moving forward.

[Addendum from Charlotte Wile: Example 3d should be labeled 3c] 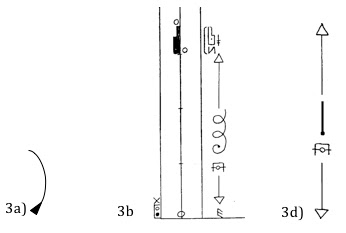 4.1   In this video the group continued their discussion of Lynne's proposal for design drawing on vs. the standard method of interpreting such indications.

4.3   What should be the criteria for determining the rule for interpreting design drawing. For instance, should it be what seems "intuitive" or "normal"? Should "consistency" in drawing on different surfaces be considered?

4.4   Should drawings in which there is a change in planes, as in a gymnastic ribbon dance, be considered?

NOTE: See Lynne's addendum to this discussion at the end of this posting.

5.1   In Video 5 the group discussed the  phrasing of direction signs.

5.2.  Ray said Maria Szentpal once told him that a series of consecutive direction signs should be interpreted with a very slight pause at the end of each given movement to a direction. However, in the LN text it says there should be continuous movement without a pause.

5.3   The difference between the phrasing of the direction sequences in Ex. 5a-c.

5.5    In Motif Notation, unless indicated otherwise, phrasing is left open to interpretation. Further notation is needed to specify the phrasing.

5.6   How is phrasing indicated in music? How does that relate to the indication of phrasing in LN and M/N? 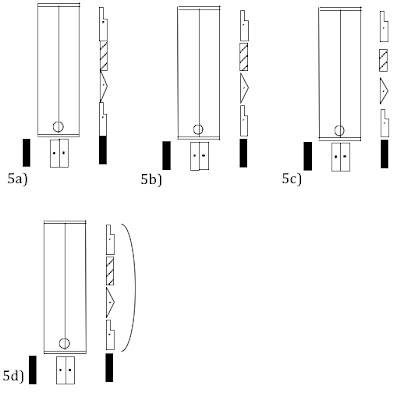 6.1   In this Video the group continued its discussion of how phrasing is indicated in music and LN.

7.2   Her presentation included new ideas on the topic, which she discusses in Video 7.  Examples discussed in the video are shown below.

7.3   In February 2014 Lynne wrote a paper which includes the new ideas. Go here to see the paper. 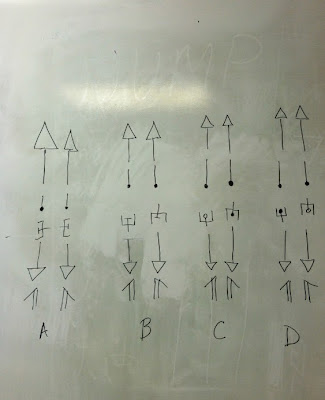 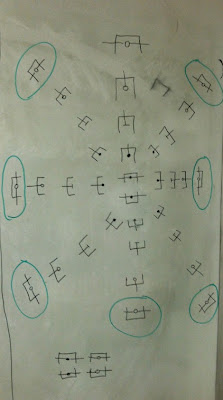 Posted by DNB Theory Bulletin Board at 12:29 PM No comments:

Theme and Variations, by Ray Cook

A facsimile of Ray Cook, Theme and Variations: A New Concept in Learning, music of Johannes Brahms, choreography and notation by Ray Cook (1981) can be found here.

For information about the music that accompanies the notation, see pages viii-ix in the book.

Note: Blank pages in the book have been left out in the facsimile.


The usual method for teaching beginners to understand theory is to read small examples that illustrate theory - but that is all the reading does. I reasoned that even at the elementary level, more could be learned from reading. With this in mind I choreographed a compete dance loosely based on the Study Guide for Elementary Labanotation, by Peggy Hackney, Sarah Manno, and Muriel Topaz (1970). With the guide as the foundation for the choreography I choose a theme and variation as most suitable. (See also page iii in the book).

Each lesson is a complete dance that systematically adds new theory to that already learned.

The end result is a compete score that follows the format for a professional dance score. Included are casting information, glossary, costumes, lighting, and a few words of  inspiration from Brahms who composed the music. The theme and variations format provides an invaluable lesson in choreography. Readers can see and understand a craft for choreography, movement motifs being developed from lesson to lesson. To complete the process, the dance can be performed in the studio for invited friends.

Posted by DNB Theory Bulletin Board at 9:30 AM No comments: